Hamartia: The Philosophical Feature of Tragedy

According to the Aristotelian tradition, a tragedy consists of several elements: mythos, character, diction, reflection, orchestra, and sound. Aristotle recognized three parts of the mythos in a tragedy: peripeteia, anagnorisis, and catastrophe. He, through his critical views about the essence of tragedy, searched for the philosophical features of tragedy more than the dramatic attributes. With reading the classic tragedians, we find that a fatal flaw (hamartia) leads to the downfall of a tragic hero. This paper details the matter by presenting the viewpoints of several thinkers and writers, and by doing so, reviews the tragic features in the classic tragedies of Aeschylus. The main issue in these dramas and writings is to dramatize a well-known man who represents the most profound sufferings and conflicts of humanity, both morally and metaphysically, and finally comes to a catastrophic end through some action of his own. But all of these lead him to a tragic, and hence, a "painful" knowledge. The tragedians, in addition to their dramatic attitude to the tragedy, had a philosophical presupposition and believed that the Orchestra is as a scene of the world; a play world. Thus, the tragic attitude of the whole world would be examined in this paper. 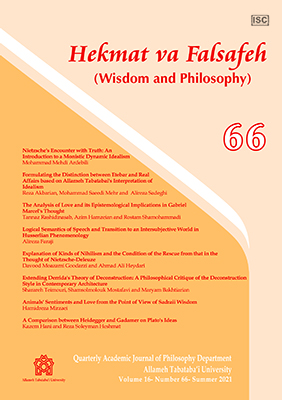